It was a long time coming, but I was sad to see those words in the announcement. I had a glimmer of hope that KCI would remain legal for Bilbao and Mythic Championship London, given that the deck’s absurd results were somewhat mitigated by an extremely low metagame share. In the wake of the giant and with a looming Grand Prix, I made a quick shortlist of decks I wanted to try and started with the obvious frontrunner:

Izzet Phoenix was the most popular deck at the GP, making up a whopping 22.2% of the day 2 metagame and eventually being piloted to the trophy by Guillaume Matignon, who somehow had not Top 8’d a GP before collecting four PT top 8s (including a win)!

Izzet Phoenix posted reasonable numbers in the event despite being public enemy number one, and placed 2 pilots in the Top 8 of the GP. The main pull towards the deck is both the flexibility and consistency of having access to a high number of cantrips and cheap efficient threats. However, the lack of a powerful catch-all answer, such as Force of Will or Daze, makes the deck weak to specific cards such as Chalice of the Void, which stops the consistency aspect of the deck, or Surgical Extraction, which punishes the deck for only having 10 threats (and only 3 differently named ones).

I am personally not a fan of the extremely low threat density, especially with few ways to protect them, and despite acceptable enough results in testing, I didn’t think this would be the deck for me. Francesco suggested we should have a look at combo decks that didn’t use the graveyard, and RG Titanshift was the level zero deck to try, so that was what I tried out next:

Valakut had a fair showing in the second day, converting one of 9 pilots into a Top 8 slot. Not the best of results by any stretch, but likely an overperformance of the deck with only a 3% share of the metagame to begin with.

Titanshift, or RG Valakut, is arguably one of the simplest decks in the format: you have a high land count and many ways to ramp, you have a 6 mana spell that will win across 2 turns and you have Scapeshift which, in combination with 7 lands, usually leads to a win. Titanshift thrives when the meta contains a lot of small creatures it can Anger of the Gods or Lightning Bolt away and struggles particularly when Blood Moon, Goblin Guide or faster non-creature based combo decks are around (such as KCI).

I was extremely unconvinced by the deck, as you are very much at the mercy of your pairings, and I was quick to look for a more balanced option for Bilbao - there was a lot of buzz around the Whir Prison deck and it was still early enough to give it a shot, so my next calling point was trying to make my opponent’s lives as miserable as possible:

Whir also had a decent GP, claiming 4% of the day 2 share with 12 pilots and putting one pilot in the final of the tournament.

The best description I’ve heard of this deck is that Whir is a combo deck aiming for a specific 2-3 card combination board state, rather than a ‘game over’ combo. For example, setting up Ensnaring Bridge and Witchbane Orb game 1 against Izzet Phoenix, or setting up multiple protected Ensnaring Bridges and a Sorcerous Spyglass on Liliana of the Veil against green-black midrange, will lead to a board state where your opponent’s choices are irrelevant.

The deck functions by gradually shutting down parts of your opponent’s deck via Chalice of the Void, Ensnaring Bridge and Witchbane Orb, whilst disrupting them with Tectonic Edge or Engineered Explosives and making sure your lock pieces stay alive through Spellskite and Welding Jar. The deck is very powerful, but perhaps became a victim of its own success with an uptick in the number of Shatterstorms appearing in sideboards.

My results with Whir weren’t good, although I believe most of my losses were my fault and I could have done much better with more practice and focus. The deck is extremely punishing of even tiny mistakes and I wasn’t comfortable taking this to a 15 round event if a better option stepped forward.

As Mox Opal and Ancient Stirrings were still legal, I decided to give the other artifact deck in the format a try next:

Hardened Scales had a poor showing at the GP, putting 14 pilots into the second day, but failing to convert into a Top 8 slot.

Scales is a highly synergistic aggro-combo deck, which exchanges Cranial Plating’s consistency for Hardened Scales’s explosive kills. If you don’t interact with Scales and they have their namesake, the deck is more than capable of producing turn 3 kills, either via a large attack and a Walking Ballista or an Inkmoth Nexus. The deck, unlike ‘old’ Robots, is also very powerful against strategies relying on spot removal, such as Grixis Death’s Shadow or green-black midrange.

Scales was a lot of fun and involved a number of interactions that allowed outplaying opponents, but it had two major issues: games where you don’t draw Arcbound Ravager and/or Hardened Scales quickly turn into grindfests in a format where everyone is trying to get you dead asap, and Shatterstorm was now a feature of most red sideboards, due to the rise of the Whir Prison deck. These factors combined to turn to what I believe to be the best deck in the format:

Dredge was the breakout deck in Spain, turning 15 pilots into 3 Top 8 slots and maintaining a strong presence throughout day 2 otherwise.

The current iteration of Dredge has a lot of things going for it and offers the pilot a lot of opportunities to outplay opponents to boot:

Last, but not least, Dredge abuses Faithless Looting like no other deck in the format, turning ‘draw two, discard two’ into ‘draw ten’

Dredge came into this GP as one of the top decks to beat and, despite the large numbers of hate, the deck still outperformed the field in the second day of the competition. There were a higher number of Ravenous Traps, Leyline of the Voids and Rest in Peaces floating around than anticipated and the deck still excelled - I would play Dredge again in a heartbeat.

I don’t have access to the conversion rates from day 1 to day 2, but we can make a few deductions from the day 2 metagame graphic:

For reference, in order, this was the Top 16 of the event:

There are 5 weeks until Mythic Championship London and no major changes planned until then - there is no Banned & Restricted announcement to shake up the format, and War of the Spark will not be legal for that event. In a format like Modern, I am a firm believer in synergistically proactive strategies, and the ‘broken’ decks of the format have all shown us this, from UW Eldrazi to KCI. Using the Bilbao results as a baseline, Izzet Phoenix, Dredge and Shadow Zoo (although the data is very limited on this one) seem to have performed a tier above the rest of the field, whilst Humans, Tron, Affinity, Grixis Shadow or UW Control seem like decks you should avoid, if you have the option to play something else.

I am not expecting any banlist updates before London, as the format will already be shaken up by the London mulligan rule. In case you aren’t aware, a new mulligan rule will be trialed out at the Mythic Championship: rather than shuffling your hand in and drawing one fewer card, players can shuffle their hands in, draw 7 cards, then put as many cards as the number of mulligans they took on the bottom of the library. A lot of words have been written on the topic and, whilst I think the rule is very dangerous, I don’t think it will actually break the format.

The largest gainers with the rule are proactive decks that are looking for a specific card, or pair of cards, in the opening hand. For example, something like Amulet Titan will become more powerful as the deck can operate just fine on 5 or 6 cards whilst having a higher chance of finding an Amulet with mulligans. Something like UW Control would, in theory, be much worse under this rule - even though they can mulligan into hate cards such as Stony Silence or Rest in Peace more consistently, UW cannot operate as easily with fewer cards.

Having said this, I still can’t think of a good reason to not register overcosted Flying Men and Lightning Helixes.

Tags for this article: ModernMagic Muses 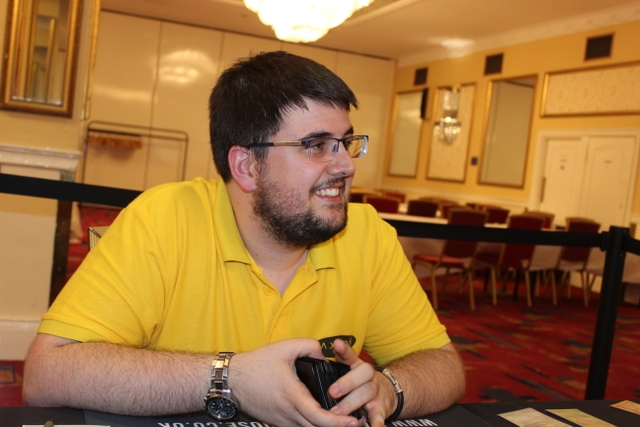 Joao started playing competitive Magic in England in 2007 and has been a Grand Prix grinder since then. Joao has retained Bronze status since induction and has been rewarded for his consistent results with a win in Grand Prix Turin 2018. He enjoys thinking outside the box and is one of the more creative team members when it comes to fresh ideas. His approach is one of gradual improvement and he is constantly looking for flaws to fix in his game. His aim is to achieve Silver and stay on the Pro Tour circuit.