It’s a brave new world out there.

Leading up to Magic Fest Bologna I was set on playing Temur Delver but everything changed when the ban hammer fell. With only two weeks until the tournament, Wizards announced that Wrenn and Six was banned in Legacy. With not much time to find a new deck, I thought it would be best to fall back to the old reliable; Sneak and Show.

The deck itself is built around a simple concept; you use either Show and Tell or Sneak Attack to ‘cheat’ in either a Griselbrand or an Emrakul, the Aeons Torn and cross your fingers that it is good enough - a lot of the time it is.

The core of the decklist has not changed much over the past few years but I will break down the numbers on each card and why it should be included.

2 City of Traitors and 3 Ancient Tomb - You need 2 mana lands for your best draws as they allow for more consistent turn 2 Show and Tells. City of Traitors is the better of the 2 but gets much worse in multiples so you end up on these numbers.

3 Volcanic Island - To be honest, you can get away with 2 because you never really want to fetch for them early. 4 is too many because the deck is reasonably bad against Wasteland so 3 is the most common number you will see.

3 Snow-Covered Islands - With the introduction of Modern Horizons earlier in the year, there is simply not a reason to be playing regular Basic Lands anymore. You want 3 Islands because you want to be fetching for them aggressively on the first few turns of the game but you will never really need more than 3 in a given game as your most expensive spell costs 4 mana.

8 Fetchlands - If you are playing Brainstorm then you need to be playing some fetchlands. The fetchlands just fill out the rest of the mana base because they also provide wasteland insurance.

0 Mountain - Up until recently I was playing 1 Mountain over the 8th fetch but the more that I play with the deck, the less I think that it is needed in the list. You will normally always fetch for your Islands first over Volcanic Islands so when you need red mana you should always have Volcanic Islands left to fetch for.

4 Lotus Petal - Lotus Petal allows for your turn 1 Show and Tells and also allows you to keep going after putting a Griselbrand into play with Sneak Attack. Having access to surprise mana might throw your opponent off!

4 Show and Tell + 4 Sneak Attack - These are the namesake cards, if you don’t draw them then you will not win the game.

4 Griselbrand + 3 Emrakul - These are your creatures and often the best thing you can be putting onto the battlefield. Griselbrand is by far the better creature as it allows you to refill so easily. Often you will be using a large amount of resources to try and resolve your first Show and Tell or Sneak Attack so you will need to refuel. I am only playing 3 Emrakul because with Sneak Attack one hit with Emrakul often is not enough to win and I have certainly lost games where I have attacked with Emrakul and not drawn anything to do for the next 6 turns. Additionally, cards like Karakas and Oko mean that putting an Emrakul on the battlefield is not always effective, which is why you only play 3.

2 Omniscience - Never leave home without Omniscience! This is your easy way out of so many situations such as a Karakas shutting off your Show and Tells or a Pithing Needle on Sneak Attack. Once you have an Omniscience in play through Show and Tell, casting either of your creatures gets significantly better - If you cast Emrakul then you get an extra turn and if you cast Griselbrand then you can draw cards in response to a removal spell to try and find a counterspell and still have mana available for follow-up plays.

Once the threats and mana are out of the way, you need both a way to make your deck more consistent and a way to protect your combo.

4 Brainstorm + 4 Ponder + 4 Preordain - Anyone who has played much Legacy can tell you how powerful the blue cantrips are and that is no different in Sneak and Show. Brainstorm is especially important because often you will find yourself with 3 Griselbrands and no way to put them into play. Between the other cantrips and the 8 fetch lands, Brainstorm allows you to sculpt your hand to the point that you have no unneeded cards.

Ponder is the next best cantrip because you still get to look at 3 cards and can manipulate which of those you draw with your fetchlands so 4 of them get thrown into the decklist.

Preordain is the worst of the 3 and is often the one that gets trimmed/cut after sideboarding. When you are a combo deck that is looking for specific pieces to be able to do your thing, not being able to look at 3 cards straight away can be a huge downside. However, I would still play 4 because you want to have as many cantrips as you can because of the need for consistency.

4 Force of Will - This one is pretty standard for a blue based Legacy deck. Interacting for no mana is a huge advantage at almost any point in the game and Force of Will is the best way to do so.

4 Daze - Daze has been a recent innovation in the deck by Sneak and Show master Jonathan Anghelescu (@JPAnghelescu on Twitter) and has proven to be incredibly powerful in the deck. There are some neat tricks you can occasionally pull off such as picking up your Volcanic Island to protect it from a pesky Wasteland but the important part is to help you force your combo through in the early stage of the game. Having access to 8 ‘free’ interaction spells as opposed to just the 4 Force of Wills really helps in so many matchups and the ability to just counter a key spell from your opponent on curve for a low cost can be backbreaking for them.

Your sideboard as Sneak and Show comes down to a few things:

My sideboard roughly follows these guidelines as follows

Most of the cards for the first 3 points can be tweaked around based on the metagame that you are expecting but I would never ignore any of these sections as you could find yourself weak to certain matchups.

The additional threats that I chose to play were 2 Arcane Artisan and 2 Blood Moon. Arcane Artisan has been a card that has jumped in and out of Sneak and Show sideboards since its printing in Battlebond but I think it plays a crucial role in the matchups where Show and Tell is at its worst. For instance, in the mirror and against BR Reanimator it allows you to enact your main game plan while not giving your opponent the chance to make a free Griselbrand of their own.

There are also some matchups where your spells are quite taxed due to Chalice of the Void or Thalia, Guardian of Thraben where Arcane Artisan can help you to go through your deck without relying on your 12 cantrips.

After the Wrenn and Six ban I was expecting a lot of people to be turning up with their greediest manabases after being freed from being Wastelanded every turn. This means that Blood Moon is going to be at its best because it can completely ruin the fair decks with lots of dual lands. The reduction in the amount of Wastelands also means that I was expecting there to be a high number of Dark Depths running around. Because of these factors, I knew that I wanted to have access to 2 Blood Moons in the sideboard games since the likelihood of it stealing some games on its own seemed high.

I was quite lucky throughout the tournament to not run into some of my worst matchups such as Reanimator and UR Delver and instead got paired against some of my best matchups in Lands and Elves.

Going forward, if the metagame goes towards lots of fair Snow decks with Okos then I think that Sneak and Show will be well positioned and can always threaten to do well at a tournament. If the metagame moves towards Delver style decks with a fast clock alongside the disruption then it might be time to set the Griselbrands aside.

My goal for Bologna was to play some Legacy, eat good food and enjoy the company of my friends. In what was an incredible weekend, I achieved that and a bit more! See you all in Brussels for the Players Tour! 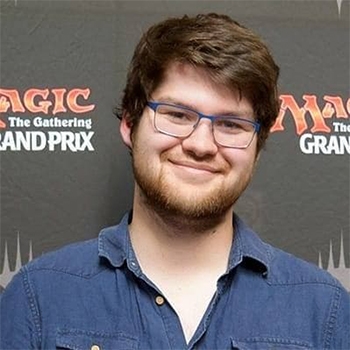 Matt started playing Magic in Innistrad after learning to play at school in 2011. After going 11-3-1 at his second Grand Prix Matt gained the fire to play competitively and regularly attends almost every Grand Prix in Europe. With a Grand Prix top 8 in Birmingham, 2 Pro Tour appearances and a handful of other Grand Prix cashes to go along with Bronze status, Matt aspires to become a Pro Tour regular and a Grand Prix champion. With a love for Standard, Matt can often be found at competitive level events jamming games of his favourite format.