The competitive landscape of Magic the Gathering has changed significantly in the last year or so and Team Axion has changed with it. Following the changes to Grand Prix and an increased importance being placed on Online Play we’ve had some roster changes as some of the more tenured members have moved away from the game. Autumn Burchett left the team after their great successes and is now a two season member of the MPL. David Calf and Henry Channing both also stepped down from the team during the past season.

However, these luminaries have been replaced with some of the brightest talents the UK has to offer and they’ve already proven their mettle at the first European Players Tour in Brussels with some outstanding performances. So without further ado let’s meet the team!

James has been playing Magic competitively since 2010. He joined Team Axion in 2016 as the last of the initial team and has since made his first PT at PT Rivals of Ixalan. He attends as many events as his work life will allow and is best known for being perennially busy. He frequently has his own ideas about a format which leads to him playing a different deck to the rest of the team for some major events.

Outside of Magic, he is always busy with work but in his spare time he enjoys playing board games and cooking. He will also always make time to watch the NFL games during the season and actively follows the Seattle Seahawks.

Chris started playing competitive Magic with the release of Khans of Tarkir and now tries to attend as many GPs as time and money will allow. Fresh off his first Pro Tour in Richmond his main aim is to qualify for the new Players Tours in 2020.

Never to be found without Jund to hand, he is a lover of BGx, and will play midrange whenever it is viable (and sometimes when not!)

Matt started playing Magic during the original Innistrad block through a lunch club at school and has been playing competitively ever since. With a Grand Prix Top 8 in Birmingham 2018 (Standard) and Bologna 2019 (Legacy), Matt is looking to continue his success at that level by grabbing another Top 8 in a new format. He hopes to come up with some more PT appearances and a good finish at the PT level this year. With a love for competition, Matt can be found at almost every Grand Prix in Europe jamming some friendly games in between rounds.

George has been playing Magic competitive since about 2014 and has had some Pro Tour and Grand Prix success. With recent changes to Organised Play he has taken somewhat of a more backroom role in the team, competing less frequently but trying to help the members of team live up to their potential. A firm believer in proper testing processes, George can often be seen poring over decklists from events in all formats.

Charles is a London based player that started playing competitive events back in Gatecrash in 2013 and has been on the competitive train ever since then. He qualified for his first Pro Tour after an RPTQ top 4 finish and attended Pro Tour Kaladesh where he put up an impressive 8-2 in the Standard portion and has since qualified for three more Pro Tours. Charles also has a GP win under his belt in Team Constructed alongside fellow Team Axion member Christoph Green and Ben ‘BMJ’ Jones.

Charles always strives to improve his game and return to the main stage of competitive magic. You will most likely see Charles at most European Grand Prix or competitive events around the UK. Charles enjoys all aspects of magic but he is happiest when cubing with friends or doing an after tournament team draft.

Since he started playing Magic in 2012, Francesco has fully immersed himself in the competitive aspects of Magic. After moving to England in 2014 he became a Silver Level Pro and has been a constant presence on the Pro Tour ever since. Francesco joined Team Axion in 2016, with the aim of contributing to the development of a major mainstay team at future Pro Tours. Francesco is at his best with a 40 card deck, but also enjoys the Standard format. His achievements include 2 Limited Grand Prix Top8s and a 3rd place in the 2014 World Magic Cup.

For 2020, Francesco’s objective is to attend all the European Players Tours, with the aim of qualifying for the Players Tour Final.

Sean learnt to play Magic in 2013 with Theros and has been playing competitively since early 2018.  His accomplishments include a stellar end to the season in 2019, winning the FACEIT UK National League and a Magic Online PTQ. Whilst Sean’s formats of choice are Sealed and Booster Draft, he is no stranger to constructed and is always eager to learn new decks.

His main goal is to continue to improve as a player by playing as much top-level competitive Magic as possible; both at tabletop event circuits, and by taking advantage of the new opportunities afforded by MTG Arena.

Alex started playing Magic Online in late 2009, and quickly discovered that the depth of Magic kept pulling him back from other games. He made the jump to the paper scene in April 2018, and has since put up Top 8 finishes at a Grand Prix and at England Nationals, as well as recently qualifying for his second Pro Tour. Standard's ever-changing nature cements it as his favourite format but Modern and now Pioneer are not far behind. His goal is to qualify for as many PT-level events as possible, and he isn't afraid of playing something off the beaten path in order to do so.

Outside of Magic Alex is a husband, father-of-two, and general lover of games.

Christoph started playing Magic around a kitchen table, with three other EDH players, with fresh-out-of-the-box 2011 Commander pre-cons. Since knuckling down with the more competitive side of Magic in the past two years Christoph has found glory by winning Grand Prix Madrid in 2018 and recently succeeding in qualifying for the first two Regional Players Tours of 2020.

Even though his deck choices can be questionable, he strives to make the matches he plays both fun and competitive for both players involved, and endeavours promote positivity in the British magic scene.

Kayure began playing Magic competitively around the release of M13. After minor success on the English circuit, his breakthrough year was the 2015/16 season, when he was a member of the English World Magic Cup team, the winner of GP Bologna with Blue-White Eldrazi and attained Silver Level Pro status.

One of the founding members of Team Axion, and current captain, Kayure has a keen desire to help English Magic thrive and will always take time to speak to any player.

Though his best results have come in Modern, Kayure’s love for the game means he is happy playing any format.

Usama started playing Magic during Born of the Gods and hasn’t stopped since then. His favourite format is Modern due to its diverse nature and how it rewards practice and knowledge of the metagame. On the other hand his biggest accomplishment so far is winning Team Limited Grand Prix Bologna 2018. He thoroughly enjoys the complexity of the 40-card format where there’s always room for improvement. His aim as a Magic player is to stay on the Pro Tour train. His other accomplishments include: a Grand Prix top 16, a Pro Tour Top 64, three GP Top 64s, a team Grand Prix Top 24, two Magic Online PTQ Top 4s and two RPTQ Top 8s.

Dominic started playing Magic at a young age during Onslaught. After playing on and off online for several years and being taught how to play Limited by Nick Li, Sean Li and Raoul Zimmermann, he began playing competitively in 2017 and now attends as many Magic events as he can register for. With three 12-3 finishes at Grand Prix and nine PTQ/WPNQ top 8s, Dominic is hoping to make the Players Tour one day. Lovingly referred to within the team as Brontodom (taller than all but the tallest trees), Dominic's height makes him easy to find at events and thus a natural gathering point.

Raoul started attending GPs in 2007 with Time Spiral block. Following their World Magic Cup appearance in 2015, he co-founded Team Axion alongside Kayure Patel and Tom Law. Within the team, he enjoys collecting the data from testing and making it presentable. Raoul is from Germany and currently lives in Poland; his Magic home, however, is still very much the UK. He has a few Pro Tour appearances as well as a GP Top 8 in Chiba 2019 and greatly enjoys the travelling that Magic allows you to do. His favourite Magic format is Draft, as he likes the theoretical overlap from format to format, while the change in individual cards keeps things fresh. As such, he is always eager for a team draft with friends and has 18 boosters of various formats stocked up at home.

Every member of Team Axion Now is proud to represent this great company, who have repeatedly shown themselves to be an outstanding Tournament Organiser and Magic Store. If you ever have any questions about Axion or want to talk about Magic we would love to chat - so please don’t hesitate to say hello to anyone in the yellow and purple!

Tags for this article: 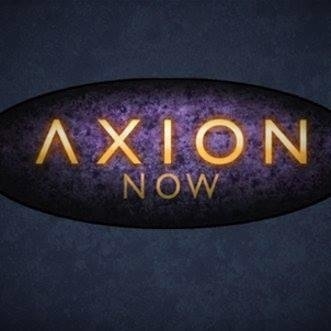 Team Axion Now are a group of players working closely together, with the aim of improving their results on the competitive circuit. Their intention is to work together to transform from big fishes in a small pond into great big sharks in the biggest pond of all - the Pro Tour. We really hope that these reports inspire others to get involved in competitive Magic. You can catch up with Team Axion Now on their facebook page