Welcome to Axion Now. We are open for all your online Magic the Gathering orders. Due to Covid19 restrictions, delivery times may vary. Contact Us
Close
This site uses cookies. To find out more, please read our privacy policy. Privacy Policy
Close
AUTUMN AT GRAND PRIX MADRID AUTUMN BURCHETT 24/01/2017
My first experience with the Kaladesh Standard format was at one of Axion Now's GPTs. And what an experience, as I secured first place, winning flights and accommodation to Grand Prix Madrid for myself and a friend (and VIP registration for the GP too!).
I was originally planning on playing Grixis Emerge at the GPT - I love both Prized Amalgam and Elder-Deep Fiend, and it seemed like the deck was doing some powerful things. However, while goldfishing the night before, I became frustrated with how bad the deck's mana was and how the deck would sometimes struggle to bring its various plans together. And so the following morning I jumped ship on a whim, nervous that Grixis Emerge would just be too inconsistent, and decided to play Raphael Levy's UR Emerge deck (which I affectionately call emURge) from the Pro Tour - my thinking being that it was doing a lot of similar things to Grixis Emerge but in a much more consistent manner.
Throughout the GPT 'emURge' treated me very well. The deck felt powerful, with some of the draws featuring chaining Elder-Deep Fiends two or even three turns in a row very early on in the game (functionally Time Walking your opponent on your fourth and fifth turns is pretty good!) Other draws allowed you to play a slower, more controlling game whilst you proceeded to grind out value with madnessed Fiery Tempers and 2-for-1s from Kozilek's Return. The deck also felt well-positioned against the slew of midrange decks I played throughout the day.

Following my win at the GPT, I practiced the deck more online over the next couple weeks and noticed there were definitely some problems with it. The control decks popularised due to the finals of the Pro Tour felt like close to unbeatable match-ups, requiring you to draw multiple Prized Amalgams early on in the game to have any real chance of pressuring them through all their countermagic. Meanwhile Spell Queller out of the UW Flash decks was a real problem due to its ability to seriously punish the fact that emURge wants to play the full eight copies of Tormenting Voice and Cathartic Reunion. The deck also had some consistency issues of its own, and whilst these issues alone weren't big enough to make me dismiss the idea of playing it in Madrid they definitely served as an extra point on a list of concerns.
So, I set about trying to find a deck to play in the upcoming Grand Prix. Initially I found myself trying a RW Tokens deck that Sam Black did well with in a Standard Classic tournament at a StarCity Games event. I was drawn to the deck due to my respect for Sam Black's deck choices, but the deck itself did not feel particularly impressive to me - almost every creature in the deck struggling against the Lilianas and Ishnakahs that had been seeing increasingly large amounts of play due to the rise of BG Delirium.
I briefly tried out UW Flash which seemed to be considered one of the three best decks in the format at that point, alongside BG Delirium and RWx Vehicles. UW Flash was the deck that the Axion Now team were very keen on for the upcoming Grand Prix, but I was struggling to get a good winrate with it and felt horribly out of my depth due to how differently the deck plays to almost anything I've played before. It's important to recognise when a deck just isn't for you, and that's the feeling I got from the matches I played with it.
Finally, running low on time before the GP, I settled on BG Delirium. I didn't have much time to practice with the deck before the event itself, and was worried the deck may not be well positioned as more and more people were taking to playing Aetherworks Marvel decks (which is a bad match-up for BG Delirium). All that said, I knew that BG was a deck I would really enjoy playing, and I would feel very comfortable playing the deck even on little practice - BGx midrange strategies are ones I am naturally drawn to, find very intuitive and suit my Magic skills.

The flight to Madrid went smoothly, the hotel that Axion Now had booked for me and my travel companion was excellent, and after preparing myself during the first two rounds (thanks to my two byes) on Saturday I found myself playing BG Delirium in the Grand Prix.
The tournament got off to an inauspicious start as I picked up a loss to UW Flash. Game 1 was relatively straightforward with an early Ishkanah making it hard for my opponent to do any damage to me, but mana issues combined poorly with some questionable decisions on my part to put me to 2-1.
In round 4 I faced Jeskai Control. Game 1 went on for over half an hour, and I finally won it with only two cards left in my deck having milled myself a considerable amount. Luckily I managed to close out the second game in my favour as there would almost certainly have not been time for a third game had I lost. The highlight was an Emrakul turn where I got to ultimate my opponent's Nahiri failing to find anything, following by making my opponent hellbent by casting their Revolutionary Rebuff on their own Gideon!
I beat BG Delirium 2-1 (the mirror match being strange as games either go very short due to Grim Flayer running one player over, or very long as both players take multiple Emrakul turns), and lost to Mardu Vehicles due to my deck stumbling a bit. At 4-2 I really needed to win for the rest of the day to have a good finish for day 1.
Round 7 I faced a Temur Energy Midrange deck with a lot of the obvious energy-based cards like Bristling Hydra, Servant of the Conduit and Harnessed Lightning, but on a more interesting note the maindeck featured multiple copies of Confiscation Coup! As the games played out the Coups did not do very much, but it's very easy to imagine they would have done a lot more had they managed to steal an early Mindwrack Demon or Tireless Tracker. As it was my opponent struggled to battle through my Ishkanah spider tokens (a recurring theme) with their Hydras and I got to 5-2.
I finished off the day facing two different Vehicles decks (one 4 colour, and the other just RW), and won both matches 2-0 due to how well Liliana, the Last Hope lines up against a lot of the low toughness threats in those decks.

Entering day 2 at 7-2 I needed to win out in order to top 8, but was excited to give it a try! ...and I fell to 7-3 after by far my shortest match in the tournament, where my RB Aggro opponent ran me over with cheap threats made evasive by Key to the City. Key to the City is one of the scariest cards in the format for BG Delirium to have to face as it makes the strong defensive wall that Ishkanah presents almost irrelevant. I did not let this loss get me down too much though as I knew I still had a chance at a good finish.
Round 11 and 12 featured matches against UW Flash that went much like I expect the match-up to go, with game 1 being in my favour provided I don't get run over by Gideon, and the post-board games being harder as they dealt with my attempts to build up defense with their sideboarded countermagic. I won both matches putting me at 9-3.
I had been fortunate to not face my worst matchup, Aetherworks Marvel, all tournament so far. This fortune left me in round 13 though as I faced down a Temur Aetherworks list - splashing blue for Whirler Virtuoso - and my opponent commented that they had played against UW Flash something like 7 times so far this tournament. I was very, very lucky to win this match with my opponent not finding an Aetherworks Marvel game 1, whilst they couldn't find any relevant threats for several turns after a turn 3 Transgress the Mind took their Chandra from them in game 3.
Round 14 contained a judge call where my opponent got disqualified for cheating. I don't want to go in to the details, but it was very stressful and the one unpleasant moment in an otherwise great weekend.
Entering round 15 at 11-3 I faced RB Aggro again and after game 1 quickly ended in their favour due to 2 copies of Key to the City hitting the board, I was worried that this might end up being a repeat of how the match-up went earlier in the day. Game 2 however went in my favour- although my opponent had Key to the City, an early Grim Flayer on my side followed by a Mindwrack Demon allowed me to ignore the Key as I got to be the player who was applying pressure, and in game 3 Emrakul, the Promised End came to my aid right as I was on the verge of death as she caused my opponent to disintegrate their Flagship, whilst their Bloodhall Priest ran deliriously in to Emrakul shooting down their Scrapheap Scrounger in the process.
I was delighted that I was able to recover from my couple early losses in day 1 to end up 12-3 at the end of the tournament, securing me 25th place out of 1,456 players. BG Delirium was a delight to play, though I would hesitate to take it to a tournament again until the metagame has adjusted to make Aetherworks Marvel deck less dominant than they seemed to be in the final results of both Grand Prixs this previous weekend.
Of course a big thank you to Liz and Francois for the generous prize of my trip to Madrid. It was excellent, and I had such a good time!

If you'd like to take part in one of our GPTs, or to find out more about our other upcoming events at Axion Now, visit the 'Events' page on our website.

Tags for this article: StandardCompetitiveTournament Report 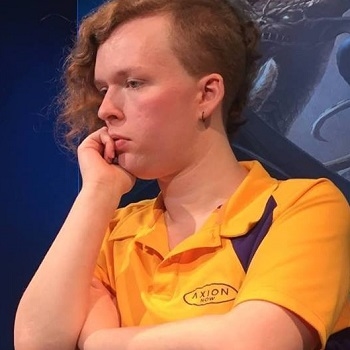 Autumn started learning Magic with the Dragon’s Maze set in 2013. They don’t attend many local events these days due to how much they choose to stream Magic Online on Twitch instead, but they do attend most major competitive events and have had great success at them. In the last few years they’ve attended several Pro Tours, won back-to-back English Nationals, qualified for the Magic Online Championship Series and achieved Silver Level Pro status. They are keen to upgrade this to Gold status and growing their stream at www.twitch.tv/AutumnLilymtg.