Welcome to Axion Now. We are open for all your online Magic the Gathering orders. Due to Covid19 restrictions, delivery times may vary. Contact Us
Close
This site uses cookies. To find out more, please read our privacy policy. Privacy Policy
Close
SNAKES IN DUBLIN - BLACK/GREEN AT PT AETHER REVOLT KAYURE PATEL 06/03/2017

Heading into Pro Tour Aether Revolt, I was given one piece of advice with regards to constructed, “Just play a deck with a known power level.”

As is the new structure, the Grand Prix (GP) before the Pro Tour was Limited, allowing us to spend a lot of time before the GP testing Standard, alongside our Limited preparation. The big decks from SCG week one were the starting point, Green/Black (GB) Constrictor variants and CopyCat combo decks. Thanks to Niels’ Dutch connections, we were testing with Niels Noorlander, Branco Neirynck, Robin Dolar, Jerome Bastogne, Jan Ksandr, Mattia Rizzi and Pascal and Peter Vieren. Alongside the rest of Team Axion, we tested online every day before flying out, and set ourselves a deadline for when we would stop trying brews and focus on the decks we were to play – Tuesday of the Pro Tour week.

This deadline meant that not only did we have sufficient time to try new things, but we would be able to get data from SCG week two as well as Magic Online leagues, which began just before GP Prague. The other benefit was that by testing against the known archetypes, we gained experience of playing with and against those decks. I could hear the advice in my head again, “play a deck with a known power level.”

Of the main decks, I was enjoying playing GB Constrictor the most, and in an effort to avoid becoming attached, began to play the Copycat control decks more. However, it was becoming clear that the aggressive decks in the format (Mardu or Tom Ross’ white weenie brews) were favourable against it. Nevertheless, the consensus among the team was that Torrential Gearhulk would be present in huge numbers at the Pro Tour, due to their strong matchup against the GB decks. This, coupled with the banning of Emrakul and Copter meant that Torrential Gearhulk was well positioned as the “go over the top” finisher of the format.

As we flew to GP Prague, most of the team were leaning toward Blue/Red Dynavolt Tower Control. Peter Vieren, an excellent control player which just needed tweaking to accommodate for the aggressive decks. Myself, Niels and Jan meanwhile, were still looking at GB Constrictor. I had a desire not to play a control deck at the PT – if someone did break it, and we’d missed something, a deck full of answers is harder to pilot than a deck full of questions. I wanted to be proactive and while the CopyCat combo is proactive, giant men with trample is also a combo.

I know that some of you will be interested in the brews that came closest to being registered. While we flirted briefly with Blue/Green Marvel and Temur Eldrazi, these were quickly discarded. The Marvel deck struggled against any control decks due to its weakness against counterspells, while the Eldrazi deck kept getting manhandled by GB – Eldrazi may be the biggest threat to the multiverse, but even Reality Smasher is smaller than Verdurous Gearhulk and friends. The deck that came closest to getting sleeved up with Blue/Red Improvise, after running into a Maverick Thopterist deck in the Magic Online leagues.

1 Giant thing with Trample and haste

3 Key to the City

We goldfished it and it was very fast, very explosive and Elder-Deep Fiend/Key to the City let you win games out of nowhere. For 18 hours we thought we’d broken it.

The next morning we tested against GB. It kept losing. We tweaked and adjusted and whenever it didn’t cast Elder-Deep Fiend or Key, it got smashed. Our enthusiasm waned. It waned further when we discovered it also was terrible against CopyCat – Implement of Combustion isn’t reliable enough against a deck with disallow or multiple combo parts. “Play a deck with a known power level.”

We had reached our self-imposed deadline. Jan and I spent the day playing GB Energy against GB Delirium, and quickly established that Mindwrack Demon is better than Bristling Hydra, Traverse the Ulvenwald is better than Attune the Aether and Grim Flayer is better than Longtusk Cub. The only draws, in our opinion, to the Energy version were Glint-Sleeve Siphoner and Greenbelt Rampager. Both of these cards gave the energy deck advantages over control by virtue of being card draw, or a powerful threat that cost just 1 mana, making it difficult to use countermagic on, even in later turns. The ‘green duress’.

Niels was not with us at the house in Prague, but was in constant communication with us and due to meet us in Dublin on Thursday. Heading into Thursday, I was fairly settled on 70 cards for Green Black Delirium, having spoken with the team, Axion and Brennan DeCandio, who won the first SCG Open of the season with the GB archetype. He gave us some good advice and insight to the deck, especially the mirror and how to approach it.

“If everyone is playing Torrential Gearhulk, we should not play Grim Flayer, we should play Scrapheap Scrounger” was Niels’ suggestion as we landed in Dublin on Thursday. Jan and I were sceptical, but after one league I was convinced. The card’s recursive abilities, synergy with Mindwrack Demon and ability to sink mana were better than the offerings Grim Flayer provided. When Niels pointed out “hold up two mana to grasp their combo, if they don’t go for it, you didn’t time walk yourself” my response was “Okay, four Scrapheap Scrounger. What’s our 9th two drop?” This question arose from the amount of mulliganing we did of hands that didn’t contain a two drop. Playing Walking Ballista on turn two without a Rishkar on turn three felt very underwhelming, and therefore extra proactive two drops were needed.

The deadline for deck submission is 23:59 on Thursday. By 21:00 we knew 72 cards. Jan Ksandr was falling asleep and mumbled something about “I still like the energy version”. Niels told him to have a nap, while he and I finalised the two drop dilemma and the sideboard. At 22:30 we woke Jan and registered the below:

1 Appetite for the Unnatural

Jan, who loves Tireless Tracker, replaced a scrounger with a Tracker and a Fatal Push with a Grim Flayer. The tournament itself went well for the deck. I finished 5-5 with the deck, while Niels went 6-4 and Jan masterfully Top 8’d with the deck with a 7-2-1 record in Standard. His Top 8 profile recognises the strength of Scrapheap Scrounger, and notably, had he played 4 like Niels and I, The top 8 of the Pro Tour would have had the full 32, which is an incredible showing for the card.

Going forward, with the prevalence of Mardu, the list would need some refinement. I still like having nine two drops, but now that we have to be the control deck more often than the aggro deck, I’d like to replace the Scroungers with creatures that can block. The deck’s core is still proactive and powerful. Giant men with trample is as much of a combo as one million cat beasts. 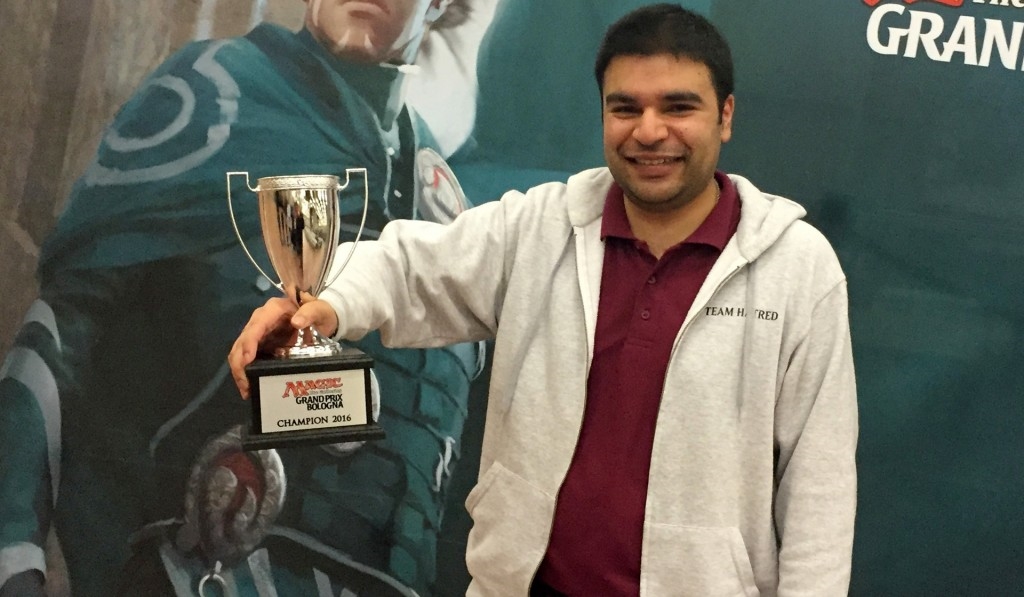 Kayure began playing Magic competitively around the release of M13. After minor success on the English circuit, his breakthrough year was the 2015/16 season, when he was a member of the English World Magic Cup team, the winner of GP Bologna with Blue-White Eldrazi and attained Silver Level Pro status. One of the founding members of Team Axion, and current captain, Kayure has a keen desire to help English Magic thrive and will always take time to speak to any player. Though his best results have come in Modern, Kayure’s love for the game means he is happy playing any format.