Welcome to Axion Now. We are open for all your online Magic the Gathering orders. Due to Covid19 restrictions, delivery times may vary. Contact Us
Close
This site uses cookies. To find out more, please read our privacy policy. Privacy Policy
Close
A YEAR ON THE PRO TOUR (PART ONE) NIELS MOLLE 24/07/2017

After qualifying for my first Pro Tour back in 2012 I’ve always wanted to go back and play on the Pro Tour again. After a couple of very close finishes in 2016 I finally managed to qualify again; this time for Pro Tour Eldritch Moon in Sydney. After this, I managed to qualify for all the Pro Tours for the 2016-2017 season and going into the last Pro Tour of the season I have a decent shot at reaching the Gold Pro Level. In this article I will go over each Pro Tour in the last year and share with you the lessons I have learned and what you can take away from them!

I managed to qualify for Pro Tour: Eldritch Moon (the last Pro Tour of the previous season) by making top 4 at a RPTQ in Warsaw. I decided to fly out to Poland instead of playing the RPTQ in the UK both because it seemed like it would be a smaller tournament and was the same cost as travelling and booking a hotel room in the UK. Going into this Pro Tour I was feeling great. I finally managed to qualify for a Pro Tour again, I was in the lead to become Irish National Champion and I still had a decent shot at reaching Silver Level in the Pro Players’ Club.

For this Pro Tour I had the good fortune to test with Cabin Crew, a team formed around a couple of Platinum Pros from the Czech Republic. I was thrilled to test with so many Gold and Platinum Pros and to learn from the best in the game. The plan was to test Limited for a week in the Cabin in the Czech Republic (hence the name Cabin Crew), and then test for a week in Sydney. I couldn’t take the whole week off from work so I flew back and forth to the Czech Republic for a weekend to do the Limited testing and then met up with the team again after I arrived in Sydney.

The Limited testing went as well as expected when testing with so many great players; the Constructed testing, however, went a lot less well. As a group, we were split between multiple decks and the biggest mistake we made was to completely miss the power of Emrakul, the Promised End, which turned out to be the breakout card of the tournament. I eventually ended up playing Black White Control and faced many Emrakuls during the tournament, losing all of my Constructed rounds. It seemed that our deck just folded against a resolved Emrakul but apparently one of us seemed immune to this. Lukas Blohon eventually took down this PT with the exact 75 that I had sleeved up, but even Lukas said “Don’t play this deck - it’s horrible” after the tournament finished.

As you’ve probably worked out, by losing all of my Constructed matches I did not achieve my goal of attaining some extra Pro Points from this Pro Tour, putting me just 2 Points shy of making Silver. This was obviously quite a disappointment for me - but another situation made my whole weekend even more disappointing. After round 4 of the Pro Tour, I was called over by Scott Larabee. For those of you who do not know who he is, he is the E-Sports and Premier Play Programs Design Manager at Wizard of the Coast. He called me over to discuss whether I had recently moved from Ireland to England and whether I was solely a Dutch National. The reason for this was because he wanted the people who represent their countries at the World Magic Cup to either be currently residing in that country or be a National of that country. As a consequence, I would lose my Irish captaincy since I had recently moved away from Ireland, and was therefore no longer a resident nor an Irish National. This was particularly galling for me because of the timing of this decision and because I felt I had a close bond with the Irish community as I had lived there for several years and I was looking forward to representing them as my last opportunity to do so, before I moved to England.

Looking back on this Pro Tour a year later, I feel that I still took away a lot of positive memories. I got to know so many awesome players, plus after many years I finally managed to play on the Pro Tour again! However, the failure of locking up Silver and losing the captaincy dealt a heavy blow to my motivation to continue playing at the highest level. Going into the next year, I knew that I was already qualified for Pro Tour Kaladesh but was considering taking it a little easier on the Grand Prix circuit. As you can see from the title of the article, this didn’t quite go according to plan!

I qualified for this Pro Tour by making top 8 at Grand Prix Prague 2016, but since my season previously ended in a bit of a downer I decided to skip some GPs prior to this Pro Tour. As I wanted to slow down and not dedicate too much of my free time and holidays to Magic, I chose to test with a small group of players instead of a larger team. Therefore, I ended up testing with only 3 other players for this Pro Tour: a GP champion, a former Dutch National Champion and a Gold Level Pro. We had some testing sessions online and we met up a week before the Pro Tour in Honolulu to test in person for the last couple of days. At Grand Prix London, the week before the Pro Tour, I saw many people acquiring cards for a Marvel deck so I decided to brew a list of my own on the way home. Very soon, we discovered that the deck was insanely powerful. When we arrived in Honolulu I continued working on the Marvel list and by Tuesday I was locked into playing it for the Pro Tour. In the run-up to the Main Event we kept on changing the list and even ended up playing a Kozilek, the Great Distortion as the ninth target to hit with Marvel and an extra way to “flashback” Kozilek’s Return.

Being locked in early on this deck also opened up my time to play more MTGO drafts than I normally would. At the Pro Tour, the extra drafts paid off! I started the tournament with a 3-0 record from my first draft by drafting an aggressive Red-Green deck. The thing I remember most about this draft was passing a Fumigate and then beating it in the final of the pod. Going into the Constructed rounds, it seemed many other people had come to the same conclusion as us and it turned out that one third of the field were on Marvel. At the end of Day 1, I finished 3-2 in Constructed and went back to our apartment with a good 6-2 result overall.

Going into Day 2 my aim was 5-3, which would put me on a 11-5 record and qualify me for the next Pro Tour in Dublin. The second draft itself went well - actually playing the draft went horribly. I ended up going 1-2; putting myself into a difficult position where I needed to go 4-1 to re-qualify for the next Pro Tour. To begin with it went according to plan as I won the first two Constructed rounds but then I ran into back-to-back control decks, handing me losses 5 and 6 and ending my hopes to bounce straight back to the next Pro Tour. However, I rallied back and won the remaining rounds to finish 10-6 and even though I felt bad about not qualifying for the next Pro Tour I was still happy with my first cash finish at a Pro Tour and my best result to date.

After Honolulu I found myself at 8 Pro Points, 6 from the Pro Tour and 2 from Grand Prix London, so I decided that since the season was still young I would give it a push and see if I could achieve Silver this year to make up for missing it in the previous year. My girlfriend played an especially important role in this and helped me book a last minute ticket to GP Warsaw. The Grand Prix itself went very well and I ended up losing the finals due to some horrible misplays on my part. Even so, I cannot pretend to be sad about losing the final of this GP, as reaching the top 8 qualified me for Pro Tour Aether Revolt in Dublin and, more crucially, gave me the Pro Points I needed to attain Silver Pro Level.

With such great results early on in the season I decided to approach things a bit more seriously than I had previously anticipated and reached out to some people to find a testing team for the next Pro Tour...  but more about that later! Hopefully you enjoyed reading about my rollercoaster ride season and hope you will join me in Part 2 after Pro Tour: Hour of Devastation, where I will do my best to clinch Gold Level. Until then... thank you for reading! 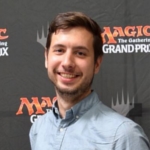