Originally, I had planned to write an article on how I saw Modern moving forward for GP Lyon based on my experiences at Pro Tour Rivals of Ixalan. I was going to say how it’s likely we get an uptick in Lantern and Hollow One, the two storied decks from the PT but likely not an increase in results.

I would also expect Mardu Pyromancer to be popular and probably adopt a Leyline sideboard plan to help deal with the changing metagame as I think both Leyline of Sanctity and Leyline of the Void were well positioned in the PTRIX metagame.

Following the GP it turns out the answer was Tron, regardless of the question.

PTRIX was my first Pro Tour and I enjoyed every moment of it, I played a variant of the “Devoted Company” deck which I qualified with, won the PPTQ with and have played at every Modern tournament since picking the deck up a year ago. I had Leyline of Sanctity in my sideboard to combat some of the worst matchups the deck has (Valakut and Storm) as well as giving general protection vs Mardu, GBx and Lanterns game plans of discard to disrupt your haymakers, forcing those decks into playing a game against my card advantage engines of Collected Company and Eternal Witness.

I tested significantly for the draft portion, ending with around fifty online drafts and a handful of paper drafts. My Draft record was 4-2. I developed a heavy preference for White/Black or White/Blue decks and although I had examples of other decks I was hoping that White would be open, it turns out I drafted Green/White and Blue/Red.

The first deck was good, I felt I got unlucky to lose to the Black/Red pirates nut draw and I felt I could have easily gone 3-0 with that deck, but I was happy to get out of my first PT draft with a 2-1 record.

The second deck was horrible but I managed to eek out a couple of wins by drawing my good cards more than my bad cards. This was a big lesson for me as I was distraught after the draft but I had to rally, remind myself that it’s still a game of Magic and that I had a plan, albeit shaky to tempo opponents out the game. My loss ended up being to Brad Nelson who had a really good Green/Red Dinosaurs deck with multiple Needletooth Raptors.

The talk of the tournament was how little preparation the teams had done for Modern. Similar to myself, everyone I talked to had effectively picked up a deck which already existed and tuned it a bit, altered the sideboard, added a spicy one-of and learned the matchups inside-out.

There seemed to be an air of malaise or apathy around the Modern format from the Pro teams, a sort of acceptance that it wasn’t a format you could get a huge edge in so you were better off over-preparing for draft and playing a deck you knew well.

I guess it was because Rivals did not add much in the way of cards of the right quality for Modern and the Ixalan card that added the most by far was Field of Ruin, followed by Search for Azcanta and Settle the Wreckage. I considered if I wanted a Settle in my sideboard but decided that it was a bit too cute.

I knew the B&R announcement was happening but I expected “No changes to the Modern banned list” or if any changes were made likely Mox Opal and Street Wraith would get banned in some super awkward “we planned this before the PT” type effort.

Then they unbanned Jace, the Mind Sculptor.

So now my article is going to be about what the likely impact of that card is on Modern. I’m going to take the stance that Jace is the best card in the format on pure “rate” or “power level” if you will. I think the unbanning of such a high power-level card will lead to a constriction of the format as for the first time we have a card which is just the best thing you can be doing and a very clear signpost for what a blue deck should look like.

I think we will see immediate experimentation with all possible flavours of Jace decks, I’m expecting the immediate homes to be Grixis and UW as both of these are established archetypes which have fairly obvious swaps for a powerful four CMC card. There are several lists floating around for this style of deck, these are my first thoughts.

I do not think that a control shell is the only place we will see Jace however, I would expect Blue Moon to utilize a card of this power level as a finisher and to play into the Mana Denial strategy which will allow you to keep key cards off the top of the opposing players library or to bounce something which slipped under the net that they now cannot re-cast due to Blood Moon.

4 Snapcaster Mage
4 Thing in the Ice

Or, in my opinion the likely best place for Jace is in a Combo deck, either out the sideboard as a totally different plan or as a complimentary piece. This strategy could be Scapeshift – a return to the halcyon days of Dig Through Time or an update to a current player in Jeskai Breach which could upgrade it’s Nahiri’s into Jaces quite easily.

I expect Jace to settle in as one of the pillars of the format and to start to warp what is an acceptable modern strategy around him. I think my Devoted Company deck will struggle in this new world as Jace provides an incentive to play a bunch of cheap removal and interaction.

If I am to persist with small green creatures I will likely go with a Bant shell which gives answers to the big mana decks and some disruption in the form of counter magic. This deck also could sideboard in Jace as a different angle of attack for when you do not want to play a combo centric game.

I think the unbannings will shake up Modern significantly and I’m looking forward to another outing in Madrid where I will be in my team’s Modern seat. I will be working on a variety of Jace decks and exploring what possibilities are available, for once we get a pseudo clean slate where the best Jace deck might be the best deck in the room or if you beat it you may get a chance to level the tournament and in Modern that does not happen often.

I’m hoping the format remains diverse I will admit that I was very surprised with the decision to release Jace from exile but I can see the rationale. So far, the games I have played with Jace in preparation for Madrid lead me to think that Jace is going to see significant play in Modern and I think it will impact several of the established archetypes.

I think it weakens Lantern as it gives another problem which has to be dealt with that almost beats Lantern at its own game and will likely cause an uptick in Kolaghan’s Commands.

Grixis Death’s Shadow is in for a rough time if I’m to believe George, his beloved deck is suffering significantly at the hands of Jace.

Tron will likely be a significant winner from this unbannings as it is a natural predator to Jace and Green/Black Midrange which are likely to pick up in popularity.

Fast or linear decks such as Bogles or Hollow One are also likely to gain as they have the ability to execute their game plan before the Control decks get setup or before the Big Mana decks are able to go over the top of them. In addition decks like Burn, Affinity or Humans will remain competitive because of the quality of the cards they get to play and the disruption combined with a fast clock they are able to present.

I expect the metagame to adopt more Lightning Bolts as this is the cleanest answer to a Jace and provides counter play at 1 mana while still having utility elsewhere, if this turns out to be true then I would look at an uptick in cards which have been punished for the popularity of Fatal Push. The most important of these is Tarmogoyf, who dies easily to a Fatal Push but it’s not so easy to Bolt away, and often provides the roadblock needed to stabilize the board.

I would expect to see an uptick of Goyfs in both Green Midrange decks playing Bloodbraid Elf but also some experimentation with Tarmogoyf as a finisher in a Blue deck possibly Sultai, Temur or Bant to take advantage of Thoughtseize, Bolt or Path to Exile respectively to back up the general game plan of stabilizing and protect a Jace; with the upside that sometimes you make a Goyf on turn 2 and it takes over the game.

If we assume that Bolt is more popular then my Devoted Company deck will likely struggle in the face of increased removal heavy control decks in addition to being not well positioned vs the decks which beat the Jace decks. It’s a sad day for Devoted Druid but such is the way of things.

In conclusion, I feel Modern will likely settle with Jace being part of the fabric of the format and we will see some innovation and new decks appearing which become possible because of this effect. I think it was a bold move on the part of Wizards to take this risk and put a card of Jace’s quality into Modern. It remains to be seen if more cards will come off the banned list or if we will end up with a Golgari Grave-troll situation again where the card proves to be a bit too good.

It’s kind-of sad they didn’t do this ahead of the PT as I think giving 450 professional players a month to break it would have been awesome although I suspect that would have significantly accelerated any metagame stagnation effect.

I’m excited to brew in Modern; I think a ton of cards got their values changed and it’s almost like a Pro Tour to prepare for all over again only this time I am genuinely excited and feel that if I have the best Jace deck it will give my team a significant advantage.

Tags for this article: StandardModernCompetitiveTournament Report 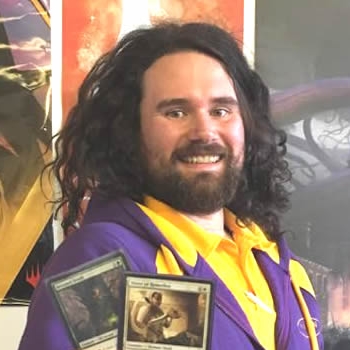 James has been playing Magic competitively since 2010. He joined Team Axion in 2016 as the last of the initial team and has since made his first PT at PT Rivals of Ixalan. He attends as many Grand Prix as his work life will allow and is best known for being perennially busy. He frequently has his own ideas about a format which leads to him playing a different deck to the rest of the team for some major events. Outside of Magic, he is always busy with work but in his spare time he enjoys playing board games and cooking. He will also always make time to watch the NFL games during the season and actively follows the Seattle Seahawks.