Maybe you heard about Magic from a friend, or you’re the parent of a child who is enthusing about the game. Whatever brought Magic to your attention, I would love to explain some of the fundamentals to you through a new series of short articles for Axion Now. I’ll cover a different aspect of the game each time, but for now, let me give you a broad overview of what Magic is, and why I think it’s great.

What are Magic cards?

Magic: The Gathering is a deck-building card game. Although players are often accompanied by an abundance of useful accessories (dice, playmats, notepads for keeping track of game scores…) all you need to get started is some Magic cards from which to build a (usually 60-card) deck. Wizards of the Coast (currently owned by Hasbro and often abbreviated to ‘WOTC’) has been publishing Magic cards for the last 25 years, so early ones look like this…

From the back, though, they’re all the same:

There are thousands of different Magic cards, but don’t worry, you don’t need to know all of them. In my three and a half years of playing Magic, I have only encountered a tiny subset of the tools that this excellent game has to offer. In fact it’s a joy to occasionally come across old cards and find out how the game was designed back in 1993.

WOTC publishes a few hundred new Magic cards each year and releases them in themed expansions called ‘sets’, in which the cards tell a story of the inhabitants of a different world. The most recent set was Rivals of Ixalan, introducing a realm where Pirates and Merfolk fight for control over the legendary city of Orazca.

You can buy cards in booster packs of 14 and add them to your collection, trade cards with friends, or buy individual cards from retailers such as Axion Now! You can build a deck using just cards from one set, but it’s better to combine them with other cards to create more powerful decks. This means that the game evolves slowly over time, as new cards make new strategies possible.

In contrast to other popular games that we may think of more traditional (Chess, Monopoly, Scrabble), Magic isn’t something that is neatly contained in a box with the same contents in each household. In fact, Magic is so diverse that no two players’ collections will ever be the same. The game is always evolving as new cards come out and more strategies become possible, meaning WOTC constantly gives us new experiments to try, new problems to solve, new characters to meet and new worlds to explore.

What’s the world behind Magic: The Gathering?

In the story of Magic the Gathering, you are a powerful wizard attempting to defeat their rival (your friend across the table) by summoning creatures and casting spells (cards). I’ll go through the basics of how to play Magic a little later in this series. Bizarrely, there’s a lot to know before we get to that point.

Magic has a fantasy setting – it was devised in the early 1990s and was heavily influenced by Dungeons and Dragons. Although you can play Magic just fine without being interested in the storyline, WOTC do a great job of storytelling and introduce us to new characters, worlds, and fearsome monsters as we play the game.

Okay, some monsters are less fearsome than others...

Some Magic cards show off traditional fantasy influences, so you’ll find an abundance of the classics: huge dragons, valiant knights, elves, goblins, and faeries. The game goes far beyond this though – we have recently been introduced to a world set in Ancient Egypt, another inspired by the vibrancy of Indian culture, and it’s always exciting to wonder where the game will take us next.

I always love that Magic steers clear of the ‘damsel in distress’ trope and favours strong female characters instead. You’ll find that women are powerful pyromancers, wizards, and soldiers in the Magic universe alongside their male counterparts, and as a female Magic player, I appreciate this so much.

How do I work out which cards to play?

Although you can happily build decks using any of the thousands of cards that Magic has to offer, you don’t have to start from scratch. There are a few ‘formats’ of Magic and, different cards are legal or are frequently played in different formats, which makes things much easier. In ‘constructed’ formats you build a deck ahead of a tournament, and most people use the same deck for a long time, making minor tweaks between events (I have been playing the same deck since July). I’ll talk about ‘limited’ formats (where you build a deck on the day of a tournament) in a later article.

I’ll go into more detail on these in future, but here’s a quick breakdown of the constructed formats you’re most likely to encounter when you start playing Magic:

Although many people like to build decks from scratch, you can find tried and tested lists online that you can build. One of the most popular sites for deck lists is Channel Fireball, where professional Magic players publish and discuss the decks that they play. When I want to build a new Modern deck, I tend to start online.

Yes, but that doesn’t mean that it’s hard to learn the basics.

Players can spend years devoted to improving their knowledge and understanding of Magic. The game requires ‘Judges’ (players, myself included, who have passed an exam in the game rules) to oversee tournaments and explain complex interactions. The rules document is 227 pages long and even as a Judge, I have never read the vast majority of it.

It’s easy to see how Magic has a bit of a reputation for being hard. I’ve known lots of people to be put off Magic by how complicated and inaccessible it seems, and I completely understand why.

Yet I could give you a deck and teach you the basics in 20 minutes.

Because playing Magic is a continuous learning process, it remains interesting regardless of your level of experience. If your community is large enough you’ll find other people who are a similar level to you, which is great. Even if you don’t, you can learn from people who are more experienced and learn futher by teaching people who are less experienced. It can be an incredibly social game – I picked up from other people nearly everything I know about the game.

Although the main demographic appears to be twenty- or thirty-somethings, kids can play too, and it’s been great to see children as young as 8 years old learning Magic in my community. Some larger stores/communities have dedicated Magic clubs to support children learning to play the game, which I think is a brilliant idea.

Where can I play Magic?

Excellent, you’ve read this far – you might want to know where you can go to play the game. Good news: Magic is played at thousands of game stores across the world. To help you find where to play, you can use this handy store locator.

Most stores run Friday Night Magic (FNM), a friendly tournament that players can join regardless of experience or skill level. The format swaps around week by week, so sometimes you’ll need to bring a Standard deck, sometimes Modern, or occasionally something else so it's best to check in advance. FNM is a great opportunity to meet other Magic players, and tends to attract people with a range of Magic experience.

Magic is a great place to meet people, and many of my opponents at FNM have become my close friends. Community strength and inclusivity is so important in Magic, and tournament organisers often strive to make their environments as welcoming as possible. My main motivator for playing Magic is my appreciation for the community and desire to improve it, sometimes even more than the joy of learning magic or the adrenaline rush of a close match. Tournaments are social gatherings, and larger events provide a great opportunity to catch up with friends from all over the country.

This brings me neatly on to...

Why do I think you should play Magic?

Magic is a complex, diverse, slowly-evolving card game that has a strong sense of community. I could spend a whole article gushing to you about why I love the game, but I’ll tell you in a few words why I think you should grab some cards and join the fun.

Whether you’re relaxed or competitive, whether you would rather immerse yourself in the Magic storyline or in complex rules interactions, whether you want to play every day or once a month, the game has something for you. You can invest in learning the rules in depth or be happy to stick with where you are. The multitude of ways to engage with Magic is one of the huge strengths of the game. I heartily encourage you to pick up some cards and discover what you can get out of playing!

I play a lot of great board games and video games, and nothing can match the sense of improvement that you get from playing Magic. The game encourages you to find interesting ways to solve problems, rewarding creativity and logic. The core rules are built a bit like a programming language, and when I was learning to code, concepts from Magic helped me to understand programming and the other way around.

There’s a whole lot of education in tiny bits of cardboard.

And of course, it’s so much fun.

Through a combination of a) how the rules of Magic are written, and b) the flavour of Magic cards, the game constantly generates and churns out surprising and hilarious situations. A horrifying, bloodthirsty werewolf may be slain by a single squirrel, a pirate ship can be crewed by a flock of seafaring goats. Magic makes these things happen all the time, and it’s comedy gold for us players.

FNM is likely the first tournament that a new player will attend, and they’re also the smallest. Magic has a huge player base, and accordingly, huge gatherings that can take you to excellent places. I plan my holidays around the Magic ‘Grand Prix’, each of which attracts a couple of thousand people. Magic has taken me to France, Spain, Italy, the Czech Republic, and The Netherlands, and this year it will take me to Sweden and Poland. The game has introduced me to cities that I would never have thought to visit were it not for the tournament scene, and to friends from all over Europe.

I hope you’ve enjoyed the first in this series all about Magic, and I look forward to teaching you more details about the game. If you have any questions feel free to find me on Twitter, and until next time, happy spellslinging!

Tags for this article: Magic MusesNew to Magic 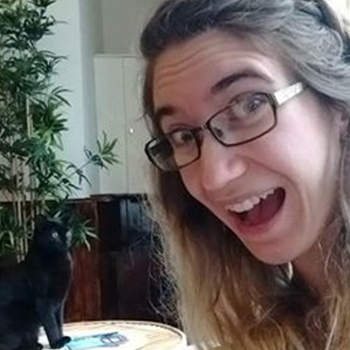 Katie is a self-proclaimed ‘fan of running, climbing, and big green monsters with trample’. She started playing Magic in 2014, recently passed her Level 1 Judge exam, and is now co-running Friday Night Magic for her community in Oxford. Her favourite creature type is Elf, which she relentlessly tries to play in every format of Magic. Katie obtained her PhD in biological sciences by sitting in a dark room and shooting cells with lasers for a few years, and is now a medical writer.