In this article I want to talk about the deck I played in the Standard seat at Pro Tour 25th Anniversary in Minneapolis and that I refined and played to a 11-4 finish at Grand Prix Brussels. At the PT I was one of the six pilots of the Bant Turbofog deck, which was born and gained popularity in an incredibly short period of time prior to the PT starting. This won’t really be a deck guide, of which I am sure there are already plenty around the internet at this point, but more of a story of how the deck came together initially and how it has evolved. This should give people the means and the knowledge to further evolve the decklist for any tournaments coming up.

My own adventures with the deck started on the monday before the PT, when my teammate Matteo Moure told me that he had heard that there was a deck going around on Magic Online playing fogs, planeswalkers and timewalks. We didn't have a decklist, but I was intrigued. After all, the main Standard contenders were RB aggro and Monogreen, two creature based decks that could not possibly have the tools to deal with a deck that use fog to protect its planeswalkers and in fact ended up being the easiest matchups for the Bant deck.

I will now go through my card choices and my sideboard, but first I should spend a few words about the cards that are the centerpiece of the deck. Teferi, Hero of Dominaria and Nexus of Fate.

Teferi is, very simply, the best card in Standard and I am sure it will be until it rotates. The other contender, Goblin Chainwhirler, as we all know, has made quite a splash into format since its printing and people have even asked for a ban before the previous B&R announcement. However the power level is nowhere near the level of Teferi. Red is possibly better supported at the moment, by powerful cards like Chandra, Phoenix, Glorybringer and many others. However, taking the cards individually, the powerlevel of Teferi is much higher. It generates a huge amount of card and tempo advantage, has high starting loyalty and can end the game by itself. He just needs a little help getting there. Traditionally, this help came from white removal and blue counterspells. If you think about it, Settle the Wreckage is basically a white fog, it invalidates an entire combat taking away most of the opponent board as well. However the first effect is more than enough. So why don't just use an actual fog? Conveniently, they cost two, the amount of mana Teferi untaps, so a fog can immediately protect him as he starts generating card advantage and getting closer to the ultimate.

Another way to protect Teferi, is to very simply not let your opponent have a turn. And that's where the other key card comes up. Now, I'll be honest, I think everything around Nexus of Fate is a big mistake. Normally timewalks have two characteristic: they are sorceries and they have a way to avoid infinite loops, typically by exiling themselves on resolution. Being sorcery is important, because it means that part of our turn must be dedicated to casting the timewalk so that at least we don’t have access to two turns worth of mana. Nexus can instead be cast at the end of the opponent turn to break the tempo against control decks, and to have two entire turns worth of mana. The instant speed is also relevant because it can use Teferi’s land untapping ability as a form of mana ramp so that it can be cast from having five lands plus a Teferi. In addition, not only does Nexus does exile itself, it shuffles in the deck whenever it goes to the graveyard, including by being countered. This creates the possibility of having virtually infinite turn by reducing the deck size and having effects to dig into the copies of Nexus.

Those two cards together form an insane combination and they naturally fit very well together into this deck.

Coming up with a starting decklist was not that difficult. I just added 4 of the key cards, to get 8 fogs, 8 timewalks, 8 planeswakers. That makes 24, and adding about 25 lands that leaves just around 10 slots to fill. After testing various iterations I came to the final decklist that I registered at the PT:

The concept of the deck is simple. Play an “Engine”, which in this case is a card that generates constant advantage over multiple turns, like Teferi, Karn, or Bounty of the Luxa. Then maximise this advantage by taking multiple turns, using timewalks and fogs. Eventually a point is reached when a second engine can be played and still take an extra turn. Approximately, when the deck contains fewer than 30 cards and there are two or more engine on the board, the game gets into a stage where Nexus gets drawn every turn.

The ramp helps to achieve the deck main plan, that is play Teferi, untap two lands, play a fog and go from there. If you can do this on turn 4, in game 1, it is an auto-win against creature based decks.

My list differs from what other people played mainly from the fact that I played the full set of 24 "combo" cards and almost no card draw to get to them. This made the deck able to achieve a very high chance of locking the game once it untaps with an engine in play, however it was much clunkier and had some difficulty getting to that point.

That was a problem since the internal fail rate of the deck was too high and that is the main cause of my result which was worse than the average (I went 7-5-1). Looking at other decklists the card I had overlooked was Chart a Course, which does a lot of things the deck needed. The looting adds consistency, decreases the deck size to have access to Nexus more often in the lategame and is additionally a good way to fuel Search for Azcanta.

The manabase had ways to be improved as well. It contained too many white sources to cast just Teferi, so white buddylands (Sunpetal and Fortress) can be cut to avoid starting hands when all the lands come into play tapped.

From the sideboard I was really happy with the Baral + 8 counterspells plan to the point of wanting an additional copy of the legend, but I also wanted a better finisher against control. I thought that a cheap planeswalker like Nissa would be enough but that could not really beat a control draw containing Glint Sleeve Siphoner and what really was needed was a reliable threat like Carnage Tyrant. Druid of the Cowl was there as additional ramp for all sideboarded games, when the opponent would have sideboarded out all their removal. I still like the idea, however, with 11 cards being locked by the Baral plan, the last 4 sideboard slots need to be something more impactful.

So to summarize the steps I needed to take for GP Brussels were:

These points led me to this:

GP Brussels went reasonably well (11-4), I was very happy with the list, especially with my maindeck. One thing I didn’t like was the plan against RB, a matchup which I should have tested more. The plan was to include Negate to combat the card that everyone who came prepared had: Insult // Injury. The card is of course very good against the deck and it is almost impossible to survive a turn when it is cast, unless we can keep up negate and fog.

My plan was as follows:

This wasn’t great. Yes, the negate was effective at surviving the turn when Insult is cast, but was a dead card the rest of the time, and this deck cannot afford to have dead draws. My current opinion is that to beat Insult we need to do something proactive rather than reactive and that means playing a threat that can help us survive this crucial turn.

The answer, I believe, is Lyra Dawnbringer. She can’t be killed by any of the removal that are likely to still be in the RB deck postboard (Cut, Chandra) and should allow us to survive a turn when Insult is cast thanks to the lifelink if the life total is not too low. It can also double up as a decent threat against control decks, where you just want cards that can’t be countered by Negate or Jace’s Defeat.

Carnage Tyrant was very effective but Esper opponents also came prepared, often including Detection Tower or Vizier of Many Faces in their decks. With the Giant Lizard losing a bit of effectiveness I think it would be good to replace it with the Angel for tournaments to come to have a better card against RB.

Speaking of which, UK nationals is coming up and I imagine this deck will be one of the main contenders for the Standard portion. I will certainly play it as I now have a lot of experience with it and I believe it is still powerful despite people having adapted to it. If anyone wants to pick it up, I will end the article with some final questions and tips that people have asked me about.

Why does the deck contain no wrath effects?

Wraths are for cowards and do not belong in this deck. Creatures become obsolete after turn 5 anyway, if you are doing what the deck is supposed to do creatures won’t damage you and there is no need to kill them. There are some exceptions in postboard games, since an Insult can mean instant death if the board is full of stuff, but I believe it’s better to play around that with Negates or Lyra. I dislike an effect like Settle the Wreckage because it requires too much mana and hence it does not work well with Teferi. Also you can get duressed before combat and instantly lose the game to the attack.

Can you beat Monoblue storm without specific hate cards?

I can’t understand people playing Manglehorn, Cleansing nova or Reclamation sage. Somehow, the accepted wisdom around the storm matchup is that fog is a huge underdog and hence you need to dedicate a lot of sideboard slots to it. I don’t believe that is true. Game 1 they have little interaction in the form of metallic rebuke, but they are playing a deck which requires many pieces to work while we are basically a 1 card combo deck (Teferi). The fogs are even relevant game 1 to win against aggressive hands with Sai or Karn. Postboard there are 8 counterspells and Barals which are more than enough to swing the match hugely in Fog’s favor.

Tags for this article: StandardCompetitiveDeck Tech 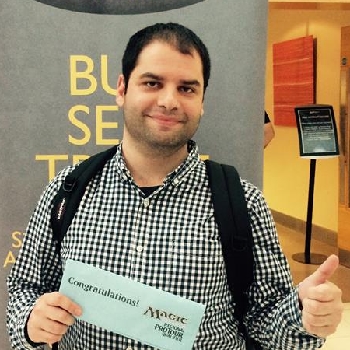 Since he started playing Magic in 2012, Francesco has fully immersed himself in the competitive aspects of Magic. After moving to England in 2014 he became a Silver Level pro and has been a constant presence on the Pro Tour ever since. Francesco joined Team Axion in 2016, with the aim of contributing to the development of a major mainstay team at future Pro Tours. Francesco is at his best with a 40 card deck, but also enjoys the Standard format. His achievements include 2 Limited GP Top8s and a 3rd place in the 2014 World Magic Cup. Francesco is the current captain of the English National Team and aims to bring the team to another important finish at this year World Magic Cup. His main objective for this season is to Top 8 the WMC and maintain his status as captain for next year.